A while back I showed you a little antique loom that I picked up on E-bay. Miraculously a week later I found the manual that went with it through another source. One of my goals upon getting this book was to make it available to loom knitters all over the place. Well with the purchase of my new laptop I am making that happen. I am able to use the speech recognition in conjunction with Wordpad to read the book to the computer. While it is not perfect, it is a lot easier than typing it in. And so I give you an exerpt from Stewart’s Manual of Crochet Point Loopation (otherwise known as loom knitting!) 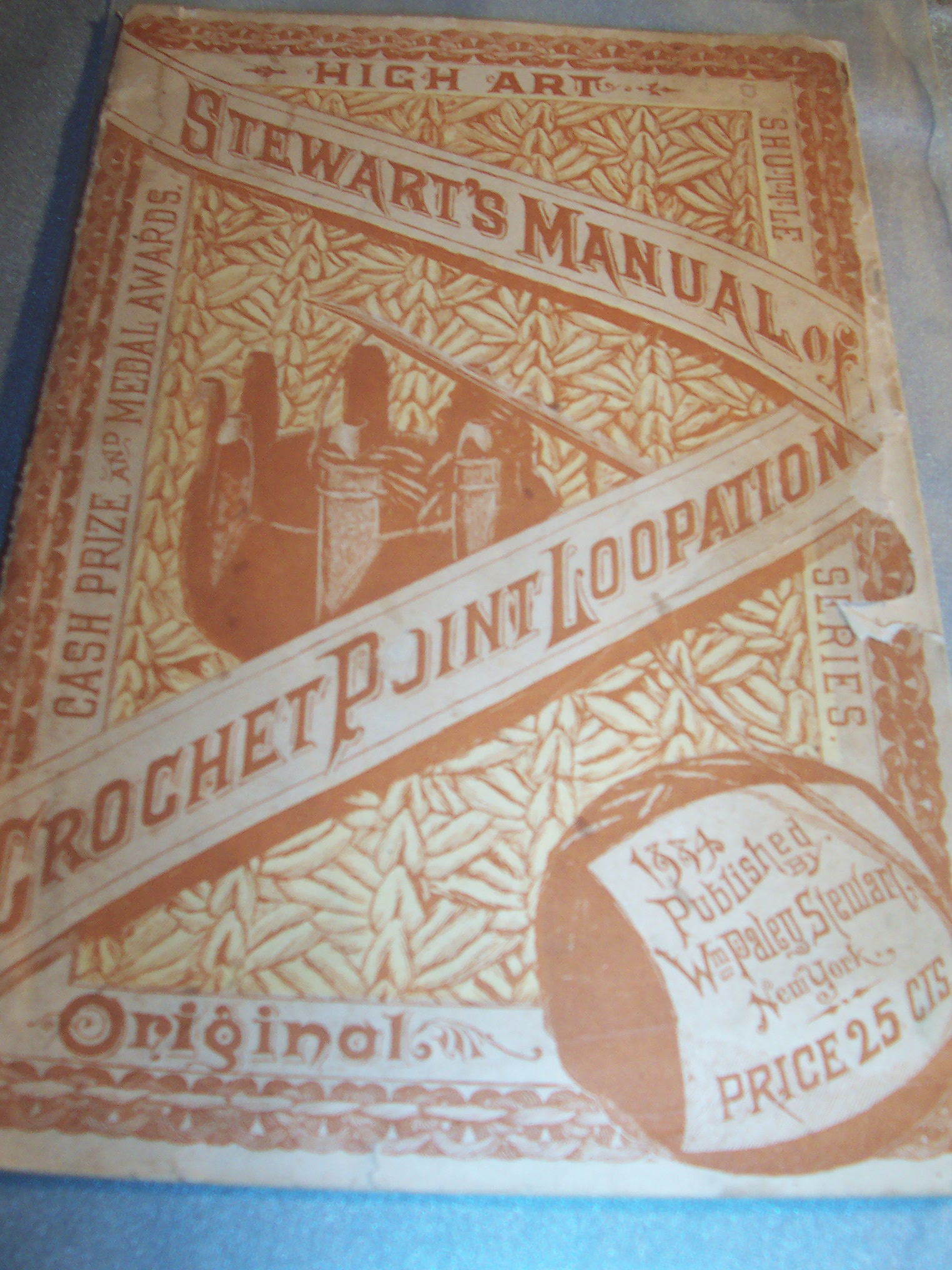 Description of the Machine

This machine is the combination of two radically new, and remarkable knitting inventions, the one part called ” “Crochet-Points”” reforming the body, and the other part called ” Crochet-Shuttle” forming it adjunct. The shuttle is made of a size corresponding to the size of the points.The “Crochet-points” are made in one-half inch, one inch, two inch, four inch and eight inch lengths, or heights, above the body, and in widths or sizes ” one-half inch” ” three-eighths inch” “one-fourth inch” and “one-eighth inch” across the face, and of the corresponding space apart or between the points.These points are made in groups or series in the form of a circle, or parallelogram, beginning with four points and ranging over the line divided into eight, twelve,sixteen,twenty, twenty-four,thirty-two,fourty-eight and sixty-four points.The least expensive of these machines are made of enameled and lacquered XXX and XXXX tin. The more expensive are made of beaten brass, nickel plated. Either kind may be very tastefully ornamented, and rendered nice and soft and to the touch of the hand by the addition of a colored velvet ribbon wrapped diagonally about the body, and through the spaces between the points.A nickel plated shuttle accompanies each series of points except the half inch of four points, which has a wire picker instead, this particular machine is designed for the amusement of children and to take the place of the wooden spools and pins with which childhood from generation to generation has been amused. The one great advantage of the four point considered as a toy, over its ancient prototype, is to be seen in the fact that the child in its amusements now learns a familiarity with the rudiments of the true knitting art in which it will seek to become an adept as it grows older. It will be understood, however, that these up four point machines, especially with the shuttle attachment, have a practical value in the making of many forms of useful cord, besides being very handy in the making of edgings and body strips.The difference in the size of the points is intended to adapt them to the different kinds of material which it may be desirable to knit. The smaller points being intended for the finer and the larger points for the coarser material. The different lengths of points are intended to facilitate a greater or less number of loops carried in pattern.All the illustrations of this book, and all the stitches shown, have been obtained on the series No. 1 which have an inch point of one-half inch size, and this is the size recommended for general experimental work.As will be seen these points are but so many great be improved crochet hooks, arranged and held together in convenient series, so that the plot of the stitch may be extended over several books, instead of being confined to the one hook as in the old method.

It will thus be seen, also, that these “Crochet-Points” must at least possess all the merits of the crochet hook, enlarged and multiplied by the advantage in favor of numbers, and the new knitting factor the shuttle. In fact, Mr. Stewart claims all his new knitting methods and machines as purely mathematical discoveries.

The similarity in the shape of the smaller of the Stewart knitting point series to the wooden spool toy which has been in use from time immemorial, may induce the supposition, at the first glance, that they have merits and functions in common, but a moment’s reflection will dispel the thought. The toy spool though in use for ages, remains the toy a device still, and no patent can be had for this except for some unimportant novelty in combination of parts, while the Stewart series of inventions is not only the determination of a new era in the art of knitting itself, but the immediate exponent of its high possibilities, in the presentation of a world of new beauty.

In fact, Mr. Stewart’s inventions are not only all-new as devices, but new also in products. He has not only invented four grand knitting devices, and seven knitting supplements, but he has created and defined four new knitting methods. At a time when inventions seemed to be limited in possibility to new modifications in existing forms, he has invented a new article having a new shape, and new functions and yielding a new and wonderful products, thus securing generic patent claims.

Among the chief merits claimed for Mr. Stewart’s “Crochet-Points” may be enumerated the following: 1st. They are simple, easily handled, durable and inexpensive.

2nd. They give an exact spacing to the loop, if regularity to the stitch, and an art finish and poise to the work not obtainable by any other means.

3rd. The same amount of work can be accomplished in about one-thirdof the time required by any other hand process.

All kinds of material have been successfully employed, cotton, linen, wool, hair and silk, and fine and coarse threads, yarns and cords and split pieces for Harlequin work. Schoolchildren have learned successfully, to make their own school bags, and very pretty scarves and chair tidies.

While this being in the flowery speech of the 1800’s it should sound familiar to the loom knitter’s out there. I had to ask what a ‘cloud’ was; it is a head scarf type of garment along the lines of a shawl but smaller. A fischu is a shawl that wraps around the bodice, and usually crosses in the front and then the ends are attached in the back; making it a bit like a vest.

The speech recognition in Vista is pretty good, the thing it had the most trouble with in this text was ‘toilet sets’ I was rather humourous! My husband tried it out and it kept coming up with words like knitting and loom and wool and such instead of what he was saying.. see I have trained my computer well!

I surely think that when Mr. Stewart wrote up this manual 123 years ago that he never dreamed that a woman would be reading it into a fantastic machine that would hear her words and translate them into print.